OVERVIEW: The Automatic Packet Reporting System was designed to support rapid, reliable exchange of information for local, tactical real-time information, events or nets. The concept, which dates back to the mid 1980’s, is that all relevant information is transmitted immediately to everyone in the net and every station captures that information for consistent and standard display to all participants. Information was refreshed redundantly but at a decaying rate so that old information was updated less frequently than new info. Since the primary objective is consistent exchange of information between everyone, APRS established standard formats not only for the transmission of POSITION, STATUS, MESSAGES, and QUERIES, it also establishes guidelines for display so that users of different systems will still see the same consistent information displayed in a consistent manner (independent of the particular display or maping system in use). See the original APRS.TXT. The two images below should give you an idea of the kinds of information available to the mobile operator on his APRS radio. On the left is the Kenwood D710 radio showing the station list, and on the right is the attached GPS with map display showing the location of other APRS stations.

Each station or object in the list has three more pages of information on it. The objects can show Repeater frequencies in an area, meetings, nets, events, hamfests, echolink and IRLP nodes and frequencies, traffic speeds, accidents, emergency situations. And the attached GPS can show the location of each of these items.

THE GOAL IS COMMUNICATIONS and LOCAL INFO UPDATE, -NOT- JUST VEHICLE TRACKING!

APRS was never intended to be just a vehicle tracking system (GPS was added in the 1992 time frame when GPS became affordable). APRS is much more. See the Kenwood mobile display above. This is the STATION LIST which shows the nearest 100 stations heard. . In this case, not only are the two stations of AB9FX nearby, but also his current VOICE operating frequency is visible. Also, we can see that this radio is in OPERATING range of three voice repeaters that are also identifying themselves as objects on APRS as the locally recommended voice operating channels.

APRS provides situational awareness to all operators of everything that is going on in his local area, whether it be Weather reporting, traveler info, Direction Finding, objects pointing to ECHOlink and IRLP, or Traffic reporting and emergency response. All of this while providing not only instantaneous operator-to-operator keyboard messaging capability for special events, but also an always-on Voice Alert backchannel between mobiles in simplex range. There is even an APRS interface to the WinLINK system called APRSlink, so that mobiles can send and receive Email without needing a PC. Think of APRS as a signalling channel to reveal ALL amateur radio resources and live activities that are in range of the operator at any instant in time.

UBIQUITOUS OPERATIONS: APRS must work everywhere to be a true resource to the mobile ham radio operator. In North America, 144.39 MHz is dedicated throughout the continent. In Europe, use 144.80 and in Australia use 145.175 MHz.. National operating rules were standardized in the 2004 time frame to eliminate obsolete and inefficient routing and called the See the New-N Paradigm. Now, only a 2 hop WIDE2-2 path is recommended though mobiles can use the special WIDE1-1,WIDE2-1 two-hop path that takes advantage of nearby WIDE1-1 fill-in digipeaters.

APRS is not a vehicle tracking system. It is a two-way tactical real-time digital communications system between all assets in a network sharing information about everything going on in the local area. On ham radio, this means if something is happening now, or there is information that could be valuable to you, then it should show up on your APRS radio in your mobile. APRS also supports global callsign-to-callsign messaging, bulletins, objects email and Voice because every local area is seen by the Internet System (APRS-IS)! APRS should enable local and global amateur radio operator contact at anytime-anywhere and using any device. See the APRS Messaging/Contact Initiative. .

For more background on APRS for example, the map below from Hessu, OH7LZB’s web site http://aprs.fi/ shows a one month snapshot of activity which reveals some gaps in the APRS coverage in the USA. 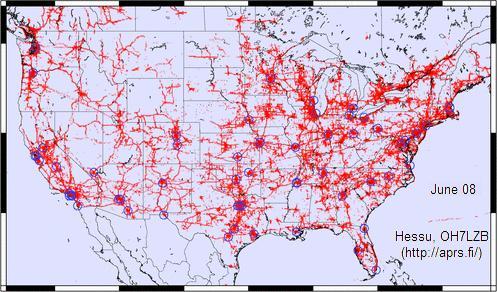