The Alexandria Radio Club is fortunate to have several repeaters in operation.  One of these, a six meter repeater, is now being used to host a net on Thursdays at 7:30 pm just prior to the normal two meter net at 8 pm.  This new 6 meter net seemed an excellent opportunity to test emergency capability and to check out my 6 meter Yaesu FT-8900 radio.  However, joining the net raised a problem as I had no suitable 6 meter antenna that would both meet the outdoor antenna restrictions for my present location in Burke, Virginia and provide full quieting on the repeater.

The first antenna I had tried for 6 meters was a ¼ wave dipole mounted vertically.  It did not provide enough signal for full quieting of the repeater so another solution was needed.  Some possible alternatives were a yagi array, a j-pole, or a folded dipole.  Any of these could be installed in the attic and would not be visible from the exterior.  However, placement of the yagi or j-pole would be limited to the exact centerline of the attic which already contained a trapped 10 meter/20 meter antenna.

Therefore, a half wave dipole seemed to be ideal.  It would consist of two half-wavelength conductors, separated by a dielectric, shorted at each end and fed at the center.  It would fit anywhere along the interior roofline.

A Google search revealed that Brian Smith (G0IER) http://www.qsl.net/g3pto/6m_dipole.html had published plans for a 6 meter antenna resonant on 51 MHz.  Benefits of his antenna included (in his words):

Since our repeater accepts input on 52.13 Mhz, it would require some retuning of Brian’s antenna to resonate at a more desirable 52 to 54 Mhz range.  He also used 300 ohm twin lead whereas I wanted to use 450 ohm ladder line which is a little more robust.  Additional features of Brian’s antenna included shorting bars 220 mm from each end and a variable tuning capacitor in parallel across the feedline 292 mm from where the 50 ohm feeder cable joins the antenna.  This capacitor effectively tunes the antenna to 50 ohms.

To recap, I wanted a different resonant range, using a different type of parallel conductor cable.  An order to MFJ quickly produced the ladder line, a coax connector, a  0 to 30 picofarad variable capacitor and some 10 picofarad fixed capacitors as a backup.  Time to start the project. 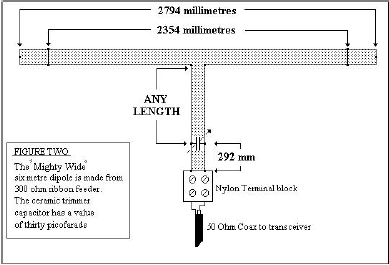 Fig. 1  Above – The original plans as published by Brian Smith G0IER
(Above diagram extracted from http://www.qsl.net/g3pto/6m_dipole.html)

All metrics from the original plans were converted to English units and a proportional factor applied to Brian’s measurements.  This resulted in what I hoped would be the correct dimensions for the antenna.  I thought it would be shorter than Brian’s so I elected to start at the same size as his and snip and analyze until the desired resonant frequency was attained.  Fortunately, I had purchased enough cable to cover one or two false starts as the first attempt ended up too short; resonating on 55 MHz.  (Snip carefully and patiently came to be my motto).  It is difficult to add ladder line back.  Much easier to snip!

On the second attempt, I started larger than Brian’s plan and soon was in the ballpark. Next, the shorting bars 220 mm from each end were added.  Note: Be careful when cutting the excess material from the cable or you may need some bandaids before you are finished.  A measurement of the variable capacitor using a capacitor checker revealed the capacitance would only vary from 27 to 47 picofarads versus the 0 to 30 picofarads I was expecting.  Therefore I elected to use 10 picofarad capacitors and add them in parallel until the antenna impedance dropped to 50 ohms.  Lady luck smiled as the first capacitor hit the mark nicely!  With 10 picofarads in parallel (Fig 3) the impedance dropped from over 100 ohms to 50 ohms.  I just ended up using the fixed capacitor instead of a variable one for the final build.

Next, I used a MFJ Antenna Tuner to measure the VSWR and it was 1:1.2 at 52 to 54 MHz.  Just what was needed.  Next, I taped the antenna to the wall in the shack and joined the 6 meter net to check it out.  Signal reports were good with a little scratchiness (expected as the antenna was on an interior wall) but fully readable.

The 450 ohm lead I used versus the 300 ohms used by Brian did not pose a problem.  Final measurements were 2813 mm for the folded dipole length.  (I used the original 220 mm measurements for the shorting bars and 292 MM for the capacitor displacement from the 50 ohm coax  connector).  A Nylon terminal block was not available so the method in Fig 3 was used to attach the 50 ohm coax.

Overall VSWR is very good and the antenna is quite light and durable for a twin lead-based antenna.  Build time is about three hours.  Soldering required. 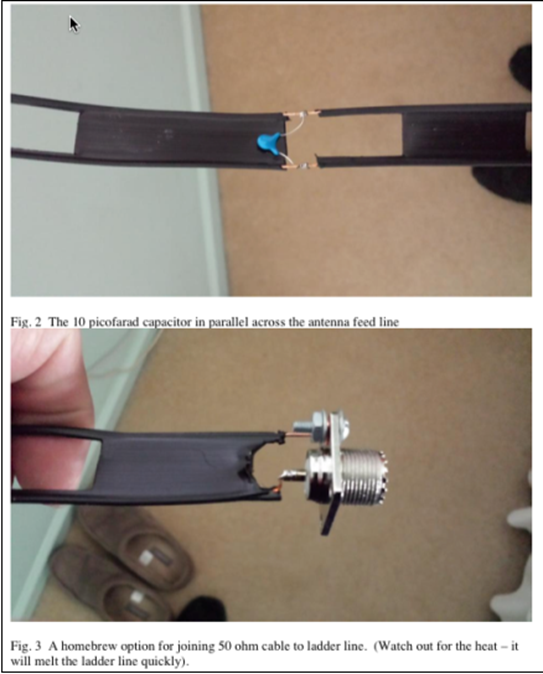 IMPORTANT factors in looking for a good used radio:

1 – Stay in your budget!  Remember that the radio needs to receive and transmit, DSP is nice, but unless your going into contesting most of the moderately priced radios will work well.

3 – Most radios are solid state and broad banded in design, so you don’t need to TUNE the radio for each frequency you operate on.

4 – If you’re going to work SSB DSP is nice but may not add much to your operating.

6 – Stay with the BIG manufacturers: ICOM, YEASU, KENWOOD, TEN-TEC.  The Chinese are starting to sell gear and may start with HF soon.  So far their VHF/UHF radios have been cheap in all aspects of the word.

The MOST important part of your HF station is the ANTENNA.

Some of our best operators use mobile whips which provide a good match.  BUT, if you can get a LONG wire out in the trees, the more antennas the better you will hear the stations.  Lots of homemade HF antennas will serve you well.  If don’t have room for a 75 meter antenna, then think of 20 meters (15 or 10 meters).  This is where the DX is for the most part.

When shopping for a use radio, make sure you can test the radio and that if it does not work, you can return it and get your money back!  It used to be that you could trust a ham to give you an honest deal, but lately not so much.  If the answer is “it’s from an estate sale and it worked before the ham passed” is NOT good enough unless you can test it on site.  Ask one of the more experienced members of the club to help you with your search.  A good radio will last for 20 plus years, but a sick radio is more of a problem. 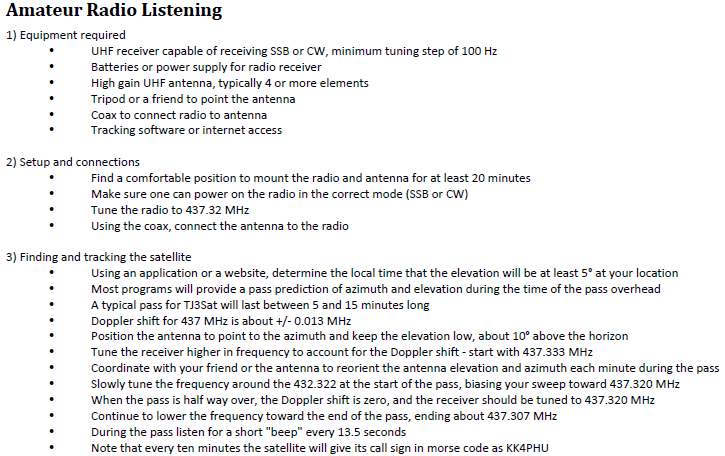 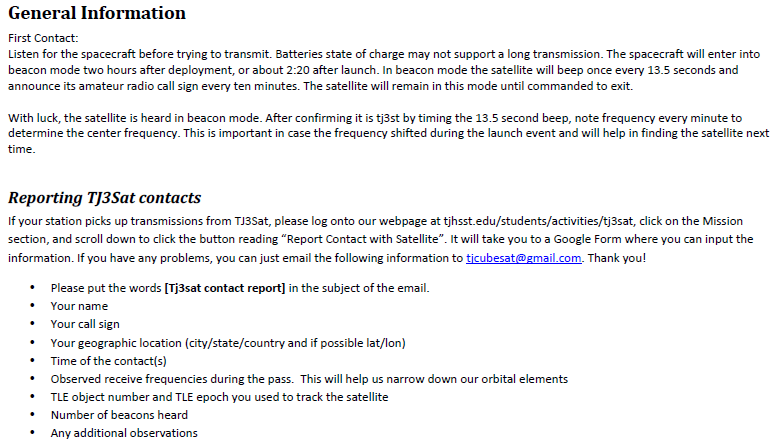 It was 30 years ago this month, after a 1979 pro-Soviet coup degenerated into civil disorder on the Caribbean Island nation of Grenada, that the US spearheaded a military intervention known as “Operation Urgent Fury.” As The Daily DX reports, Mark Barettella, then KA2ORK and a student at the Saint George’s Medical School, got on the air /J37, becoming a source of news and vital information regarding the US and Caribbean Regional Security System“intervention and rescue of US medical students in Grenada” on October 25, 1983.

Now N2MD, Barettella is heading back for the 30th anniversary of the event and will operate as J3/N2MD. Joining him for the anniversary will be retired US Navy officer Arnal Cook, N9ACC (ex-N9AKX), who was involved in the 1983 mission. He will be active as J3/N9ACC. The holiday-style operation October 23-30 will involve both fixed and mobile stations, 80 through 6 meters SSB, mostly during their evenings. QSL only via LoTW. — The Daily DX

Student Syllabus covers 400 question pool topics from which 35 questions make up FCC license exam including ARRL produced PowerPoint Topics and Film Clips portraying historical evolution of radio communications.  In addition, all exam questions can be previewed online with practice exam without cost.  Learning Morse Code is NOT a requirement, but is encouraged.

Don (KI4D) and Steve (W8RJH) reported having a great time this past weekend —great weather and met a bunch of young eager scouts!!  I received an article and wanted to pass along:
—————————-

Wireless Hot Spots for internet connectivity were established on-site for the JOTI operations and an internet café was set up to support the JOTI chat rooms transmitting voice and text communications throughout the United States and Worldwide using the internet.

This was the 56th year for the annual JOTA event and the 17th year for JOTI and it was the 4th year that Troop 581 hosted the events.  All participating Scouts, young and old, had the opportunity to complete many of the requirements for the Radio Merit Badge and learn a lot about amateur (HAM) radio and emergency radio communications while earning the international JOTA/JOTI participation patch doing it. –end–

Experience scouting via radio waves, since 1958 when the first Jamboree-on-the-Air was held, millions of Scouts have met each other through this event.  JOTA is an annual event for Boy and Girl Scouts and Guides speak to each other via Amateur (ham) Radio.  World Scout Bureau reported over 700,000 Scouts participated from 6,000 ham stations.  2012 registered 16,000 Scouts and leaders worldwide in 146 countries.

Contact Steve Wagner by email to sign up and attend a Radio Merit Badge Session on 19th October at 08:30, 10:30 or 12:30 hours to complete Merit Badge requirements. Session material, workbook, and pre-work available at http://scouting.org/jota/radio_merit_badge.aspx

All radio stations are operated by licensed amateur radio operators